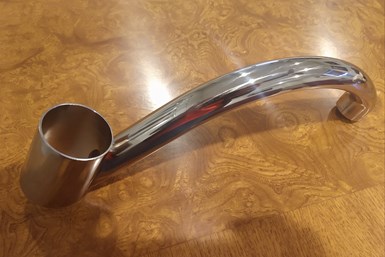 MicroKoat, LeKem’s antimicrobial EN, can be used in any application where traditional EN is used. Photo Credit: LeKem Inc.

When a client of LeKem of Indiana Inc. asked for antimicrobial electroless nickel (EN), second-generation owner Paul Feagins started development on MicroKoat. It took two years of research and development before the technology hit the market. It was slow to catch on, but Feagins is seeing traction in the wake of the pandemic.

“At first, I do not think people really understood the potential of the product but as time has passed, and now with this pandemic, the interest has increased dramatically. Because of that, we currently are doing more testing against other viruses. We’ve even seen success underwater to stop the growth of algae and barnacles for the marine industry,” says Feagins.

The antimicrobial efficacy comes from a proprietary antimicrobial preservative that inhibits the growth of odor-causing and spoilage organisms including bacteria, fungi and mildew on the treated article. When tested using the Japanese Industrial Standard, MicroKoat had 99.9% efficacy against Staph, MRSA and E. coli after six hours. When tested using the ASTM G21 method, which uses five types of fungi in a hot, humid environment for 28 days, no growth or corrosion was detected.

When the COVID-19 pandemic broke, LeKem did additional testing against a strain of the coronavirus. It showed 90% reduction against the Human Coronavirus Strain 229E: ATCC VR-740 within 6 hours. According to Feagins, the lab that administered the test found this to be a notable achievement. The testing was done out of production planting tanks, and the protection is said to last the life of the product up to eight metal turns.

On top of the antimicrobial efficacy, MicroKoat is designed for everyday production and will pass all current EN specs, according to the company. It has all the durability and versatility of EN — hardness, wear properties, compression and corrosion resistance. “The plater can process their current workload while diversifying into the antimicrobial sector, which will only continue to grow,” Feagins says. It can be used in all applications that EN is used for, and is suggested for the medical, HVAC, food, agricultural, oil and infrastructure industries and it can replace stainless steel.

LeKem has been providing high-corrosion, high-wear and functional coatings for the medical, oil and aerospace industries since it opened in 1985. Feagins, who grew up in the shop, took over for his father in 2006, expanding the company’s offerings to include EN tank design and consulting.