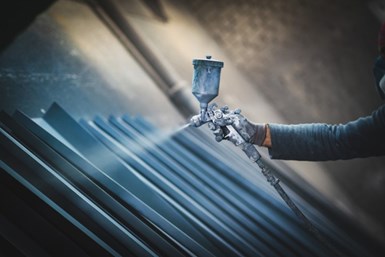 According to the company, the product’s proprietary blend of VpCI micro-corrosion inhibitors offers protection that competes with many traditional paints and zinc-rich primers. Cortec says VpCl-396 should be top-coated with VpCI-384 to form one of the company’s toughest anticorrosion coatings systems, but it can also be used as a standalone primer and/or topcoat if circumstances require. VpCI-396 reportedly offers good chemical and corrosion resistance and excellent adhesion to substrates. VpCI-396 also is said to reduce coatings waste because there is no pot life and remaining paint can be used later.

Cortec designed VpCl-396 for applications where an anticorrosion primer and topcoat is needed to protect metal substrates. For example, ballast tanks that are filled, emptied and refilled with seawater are naturally at higher risk for corrosion. Storage tanks or holding tanks containing anything from hydrocarbons to high salinity solutions also need protection. In addition, railings, walkways and other structural steel in chemical manufacturing, wastewater treatment, offshore and other corrosive environments can also benefit from being coated with VpCI-396. VpCI-396 can also be applied as a protective coating on metal roofs.

Cortec’s VpCI-396 has been used globally to provide anticorrosion protection in various applications. For example, it was used in Brazil to prime and coat wires and clamps at a wind power substation near the ocean. In Southeastern Europe, VpCI-396 was used to protect 200 electrical piers at railway stations. These piers had previously rusted, so a coating of CorrVerter Rust Converter Primer was applied first to passivate the rust, followed by a topcoat of VpCI-396. The same coatings system was used by a vehicle maintenance company in Croatia that wanted to restore corrosion-damaged wheel rims.