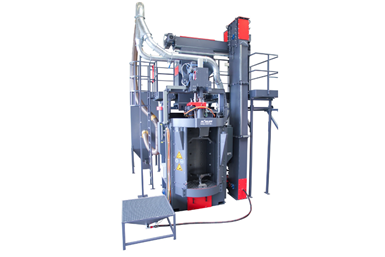 Increasing demand for electric vehicles forces automobile manufacturers to expand their manufacturing capacities. The surface refinement of these components after the casting operation with a Rösler Oberflächentechnik GmbH (Untermerzbach, Germany) swing chamber blast machine RWK 6/12-2 must be achieved in very short cycle times within an interlinked manufacturing process.

For the fully automatic de-sanding and deburring of different stator carrier versions, the Landshut plant of the BMW Group has integrated the swing chamber blast machine RWK 6/12-2 into interlinked, digitized manufacturing lines. The compact dual-chamber shot blast machine from Rösler is designed to allow the blast cleaning of the aluminum castings within a cycle time of 50 seconds. With the dual chamber equipment concept and robotic loading/unloading, the unproductive equipment times could be drastically reduced.

Within the stator carrier manufacturing line the RWK 6/12-2 – including a part feeding system, robot, a blast media discharge station and a small storage area – requires a space of only 10m2. The RWK can handle carriers with a height of up to 1,200mm and a maximum diameter of 600mm. The workpieces arrive on a conveyor belt from the de-sanding station, where most of the molding and core sand have been removed from the castings. The robot, placed in front of the shot blast machine, picks up one stator carrier at a time and places it on a special workpiece fixture in the chamber facing the load-unload zone. In case of a workpiece change, the fixture can be exchanged within a few seconds. In the course of the casting process, a data matrix code is inserted into the carriers. To protect this code from getting damaged during the shot blast operation, it is protected with a cover. For this purpose, the Rösler engineers developed a mechanism that automatically moves the protective cover over the code after the carrier has been placed on the fixture. After completion of the loading stage, the chamber turns 180 degrees. This turn moves the chamber containing the raw part into the blast zone and the chamber containing a finished part into the load/unload zone. The robot removes the shot blasted stator carrier, moves it to the media discharge station for shaking out residual blast media and then places it into an intermediate storage location.

For this application, the customer is using a zinc cut wire blast media. The media is accelerated and thrown at the stator carriers by two Gamma 300G turbines with a drive power of 15 kW each. These high-performance turbines, developed by Rösler, are equipped with curved throwing blades in Y design. Compared to conventional turbines, the precisely calculated blade curvature generates a much higher media throwing speed. In turn, this results in an up to 20 percent higher shot blast intensity and significantly lower energy consumption. The high blast intensity, combined with the dual-chamber machine design, allows maximum cycle times of 50 seconds. Another benefit of the gamma turbines is that the special Y design of the throwing blades allows the use of both blade sides. This practically doubles their usable life. With a quick change system, the throwing blades can be replaced without having to dismount the turbine from the housing.

Because of the workpiece material (aluminum) and the blast media (zinc), the shot blast machine had to be designed with special protection against explosions. This included special ducting for the exhaust air and an explosion-protected dust collector.

In close cooperation with an automation specialist, the Rösler engineers implemented partial digitization of the shot blast machine. For example, a sophisticated visualization of the shot blasting operations and blast patterns of the two turbines allows changing the process parameters during the actual shot blasting process. In addition, the operator can observe “live”, which turbine is blasting on which workpiece section. If needed, he can initiate changes, reposition the workpiece in the blast chamber or modify the blast time. This may become necessary, if, for example, a worn casting mold causes more sand to be deposited on a certain workpiece section than defined during the initial programming of the shot blast machine. The operating time is also continuously monitored. After having reached a certain operating hour threshold, the machine automatically provides information about necessary controls and maintenance work, for example, for the throwing blades, workpiece fixtures or the protective cover for the matrix code. This helps minimize unplanned equipment downtimes and significantly increases the uptime of the machine. These are aspects, which are especially important for the cost-efficiency of automated manufacturing lines. Within the framework of its efforts to expand the digitization of its products, by mid-2021 Rösler will present further innovative digital developments in the shot blasting field under the brand name “Rösler Smart Solutions”.