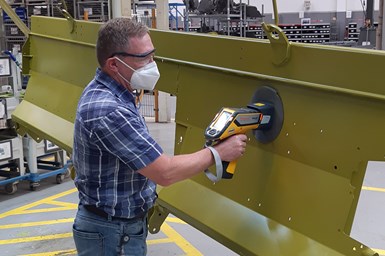 Measuring the coating weight of the ZnPO4 layer through the e-coat at Claas Bad-Saulgau.

Henkel Adhesive Technologies (Madison Heights, Mich.) has developed a new measuring system for the mobile handheld XRF spectrometer, or X-ray gun for short. The measuring system was tested at Claas Bad Saulgau and was used on the agricultural machinery parts manufacturer’s production line to investigate the potential of replacing the powder activation Bonderite M-AC 50-1 with the liquid activation Bonderite M- AC AL 2000. Rather than requiring laboratory analysis, the new system is designed to measure the coating weight of the Zn phosphate (ZnPO4) layer through the e-coat on the steel substrate in approximately 10 seconds. Using the X-ray gun, it is possible to directly and accurately analyze the activation parameters, thereby enabling Henkel Adhesive Technologies to optimize these parameters in just one day. The measured part is called “Mulde” and is made from cold-rolled steel with a 4g/m2 Zn-PO4 layer and an e-coat. For Claas, this meant there was no need to slow down or interrupt full production during tests, nor risk any loss of quality, for example in corrosion protection.

The new solution, which combined the X-ray gun and the special measuring system from Henkel and analyticon instruments is designed to achieve analysis on the production line, rather than in a laboratory.

The X-ray fluorescence analysis, or XRF, is a fast, non-destructive method for analyzing the chemical element composition of a sample accurately. It can be used to determine the type and quantity of measurable elements. The concentrations of the elements are analyzed independently of their chemical bonding. The Niton XL-2 XRF gun is stated to measure the exact composition of metal alloys in seconds. Henkel states it can identify stainless steels, non-ferrous metals and, based on their silicon and magnesium content reliably and without significant sample preparation. Users of the X-ray gun require dedicated training, such as that provided by Henkel’s technical experts. This ensures the safe and correct use of the X-ray gun.