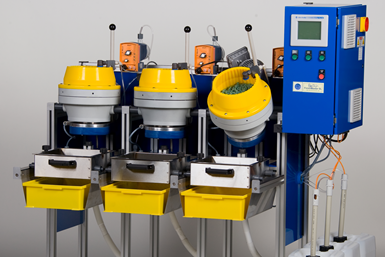 Bel Air (North Kingston, Rhode Island) offers Centrifugal Disc Finishers. These machines are designed to polish and deburr a wide range of materials including brass, copper, steel, stainless steel, aluminum, kovar, titanium and more. According to the company, they eliminate 80% of handwork and produce over five times the output of hand-deburring operations. Bel Air says they also reduce surface RA in metal parts across aerospace, automotive, medical and other industries.

The Centrifugal Disc Finisher comes in sizes ranging from 4 to 60 liters and most models come with a mobile frame, which works for cellular and JIT production. Additional features are also available, including integrated ultrasonic cleaners, on-board media storage, a direct compound feed system, and parts separation options.

According to the company, the Centrifugal Disc Finisher works by using a bowl-shaped finishing chamber, comprised of both a fixed upper bowl and spinning bottom disc. The rotation of the disc rotates both the media and parts within the chamber, forcing the mass to the stationary outside wall. Then this mass of part(s) and media folds back to the center. This process is repeated, creating a three-dimensional, toroidal action similar to a vibratory bowl finisher. However, Bel Air states that this action produces ten times the G force of a vibratory bowl finisher. While this is happening, water and finishing compounds are added into the mix to keep the media and parts clean.

An aerospace compressor blade that was centrifugal disc-finished from surface Ra of 57 to 8.

Bel Air models have a north/south gap allowing for the adjustment of the gap system. Process effluent (which contains the broken down parts of media), small amounts of part materials and water mixed with compounds flow through the gap, wearing it down. Bel Air’s adjustable gap system is designed to allow the gap to be closed as it wears down, extending the machine’s service life.