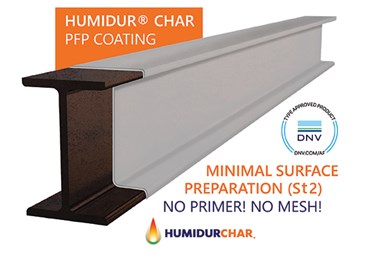 Humidur Char, launched by Acotec (Erembodegem, Belgium), is a two-component, solvent-free, 100% solid, polyamine-cured epoxy passive fire protection (PFP) system, which offers anti-corrosion and fire resistance properties by intumescent action in just one coat. According to the company, this is a major difference from traditional PFP coating process, which often require up to five coats.

A key benefit of Humidur Char is that it can be applied in one layer on minimum preparation standards, with no primer nor mesh required; it is said to provide the essential PFP on the structural steel used in the global oil, gas and chemical industries. Additionally, Acotec claims the coating can reduce manhours required by up to 50%.

Humidur Char has reportedly been thoroughly tested and received type approval from classification society DNV. The product has been successfully tested in jet fires, pool fires, gas explosions and high heat flux Jet fires. All steel test beams underwent optimal and minimal surface preparation and had Humidur Char applied directly to the steel, without the use of a primer or reinforcing mesh. The test results reportedly  showed that there was no difference in fire protection properties between optimal and minimal surface preparation, which has been formally confirmed by DNV.

As a single-layer system, Humidur Char requires no optimal surface preparation, no primer, no mesh and no waiting between layers. Acotec says the product also eliminates the risk of inter-adhesion issues, and reduces the complexity of and possible errors during the job.

Humidur Char can be trowelled or sprayed directly onto the structural component, which does not need to be grit blasted. Spray application can be conducted with standard plural pumps, so no expensive and complicated specialized PFP pumps are required.

With a wide application window in terms of humidity (max. 95%), Humidur Char is said to be appliable at any location in the world. In addition, the unlimited overcoating window and wet-on-wet application provide flexibility to the applicator.