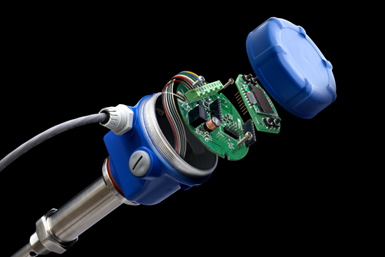 Whitman Controls, a designer and manufacturer of custom sensors and controls, has launched the L96 Series Level Transmitter, a capacitive level transmitter with dual switch and sensor capabilities that is fully configurable by the end user. The company claims the transmitter is the first of its kind.

The transmitters come standard with an OLED display and Modbus RS485 protocol, and enable the end user to select from a variety of analog outputs in the field ranging from 0-5 V, 1-5 V, 0-10 V and 4-20 mA. Furthermore, the user can simultaneously configure a single pole, single throw (SPST) latching relay for switching functionality at any desired setpoint on the measurement range. In addition, the transmitters are reportedly able to operate in temperatures up to 392°F and in pressure environments up to 500 psig.

“The L96 is a highly versatile device affording users numerous customizable options at production combined with full-field adjustability, delivering ultimate operating flexibility across a wide range of applications,” says William Brame, president of Whitman Controls. “We are actively testing our L96 units in numerous applications and are excited to see further adoption in other industries.”